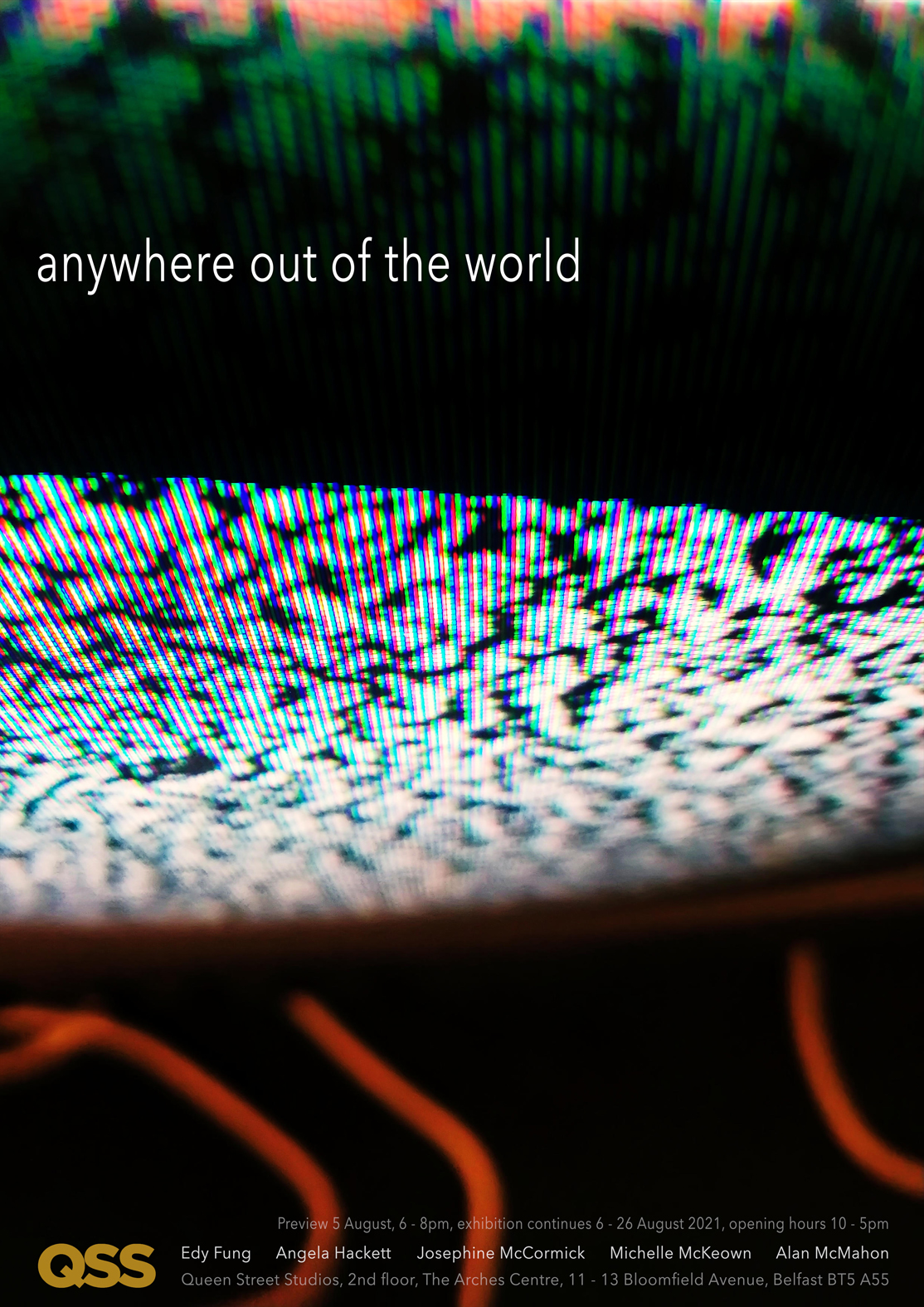 Opening hours (no booking required): Tuesday-Thursday, 10am – 5pm and 11am – 5pm on Saturday 7th August

In 1985, the artist and composer Christian Marclay released the LP ‘Record without a cover’. As the album’s title indicates the vinyl was distributed without a protective sleeve and through the course of its transit, from warehouse to turntable accumulated scratches on the surface that would become integral to the works formation, key acoustic elements determining the listener’s experience. Marclay embraces the din. His chance derived score brings to our conscious awareness that which we habitually eliminate as noise. The classical anthropomorphic point of view gives way to an experience of ‘nature’s manner of operations’1 articulated in the clicks and pops which interrupt the track’s transmission. In a similar way ‘Anywhere Out of the World’ brings together a group of artists, working across a variety of media, who are united in their exploration of the generative possibilities of noise and the role of indeterminacy in the artwork’s formation.

Edy Fung’s ‘Colour of Noise’ incorporates sampling from natural and artificial found sounds, drifting between the frequency spectrum of ranging power spectral densities mixed with live tuning of FM radio channels. Appropriating extracts from the Futurist Manifesto of Luigi Russolo’s “The Art of Noise” 1913, alongside encoded Morse signals, Fung’s ‘Colour of Noise’ signifies the arrival of the era of de-anthropocentric machine music in today’s world.

Flor de Fuego is a digital-craft artist working with programming and live coding in order to create performative experiences. Her research engages with concepts concerning the body, space, code and chaos. On the occasion of this exhibition, de Fuego will create a digital animation responding directly to Fung’s ‘Colour of Noise’ sound-work.

We are also delighted to announce on the occasion of this exhibition the inaugural presentation of paintings by Angela Hackett from the early 2000’s. These earlier works by Hackett showcase a fascination with the Irish landscape explored tangentially through a process-driven approach, whereby the properties of the paint medium direct the work’s formation, culminating in a series of paintings that capture an immanent record of landscape rather than landscape as pictorial verisimilitude .

Fascinated by malfunctioning technology, in particular a digital monitor in the corner of a communal staff room where he worked nightshifts, photographer Alan McMahon documents the intermittent interference in the device’s general transmission. Amid the spasmodic eruptions on the glitched screen McMahon discovers a resplendent realm of atomisation whereby subject and object commingle and dissolve in a moment of frozen spectacle.

Dr. Josephine McCormick is a multidisciplinary artist whose research interests span science, nomadic and sound technology. Included in this exhibition are a number of works across a range of media, all of which consider how we visualise ‘interference’ and ‘dissonance’ at both the macro and micro level. Mc Cormicks’ work are transitional visceral compositions, frequency and sound for one moment captured. The visual stratification evident in the work mirrors the process of printmaking and the transformative property of acid, corroding certainties and creating ruptures. This is the inderminate process space in which McCormick creates. Where even the omission of some element becomes as positive an act as inclusion.

For this exhibition also, McCormick has produced a photo intaglio print entitled “Anywhere out of this world’ that responds directly to the themes of the exhibition. McCormick depicts the spiralling paths of electrically charged particles as they pass through the magnetic field of a particle detector known as a bubble chamber. The colliding particles and their fleeting passage through the chamber appear to comment on chaos as a cosmic order and its generative potential.

In her paintings Michelle McKeown deploys techniques of folding and transfer to create analogous glitch-like forms. Drawing on painting’s historical canon, McKeown seeks to subvert the traditional masculine gaze and will to mastery, foregrounding instead paint-matter’s inherent tendency towards self-organization. ‘Vanitas Vanitatum’ ponders the idea of a ‘power vacuum’ that is left by a developing awareness of ‘nature’s manner of operations’ and the realisation of a non-anthropocentric model of the world.

All artists, either explicitly or implicitly, declare a fascination with the ‘imperfect’ and acknowledge the critical role indeterminacy plays in their creative process. Noise and the glitch ruptures our frame of reference and points to the ‘anywhere’ that is potentially and virtually awaiting us out of the world. 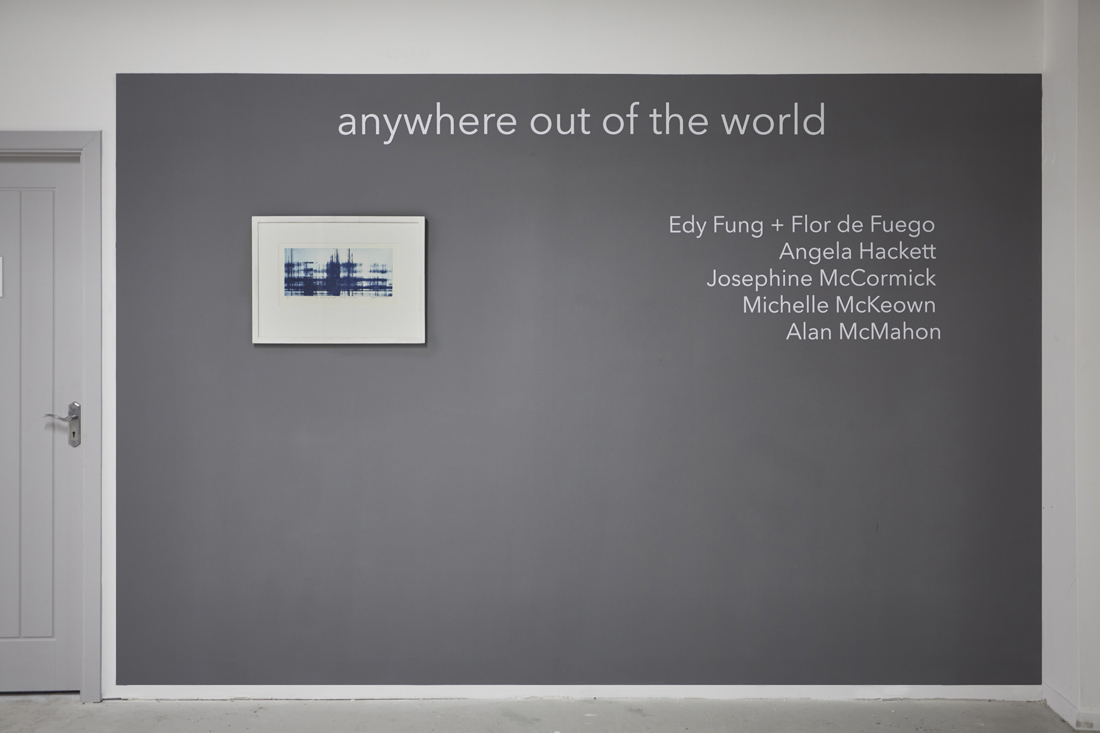 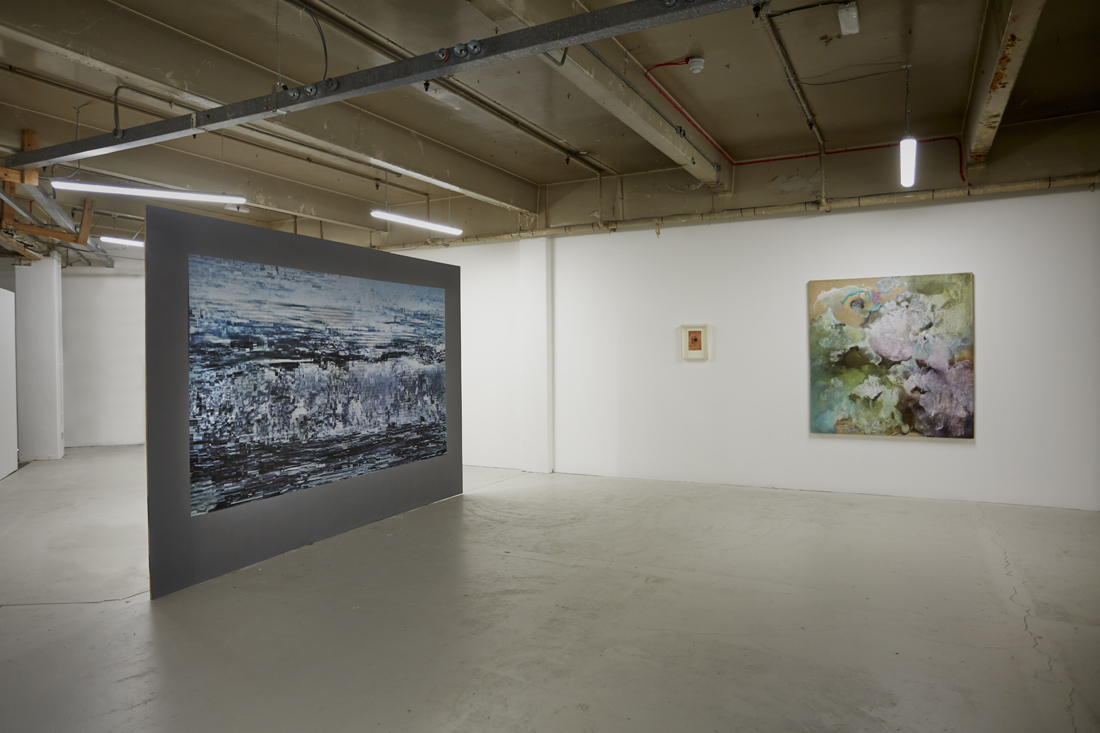 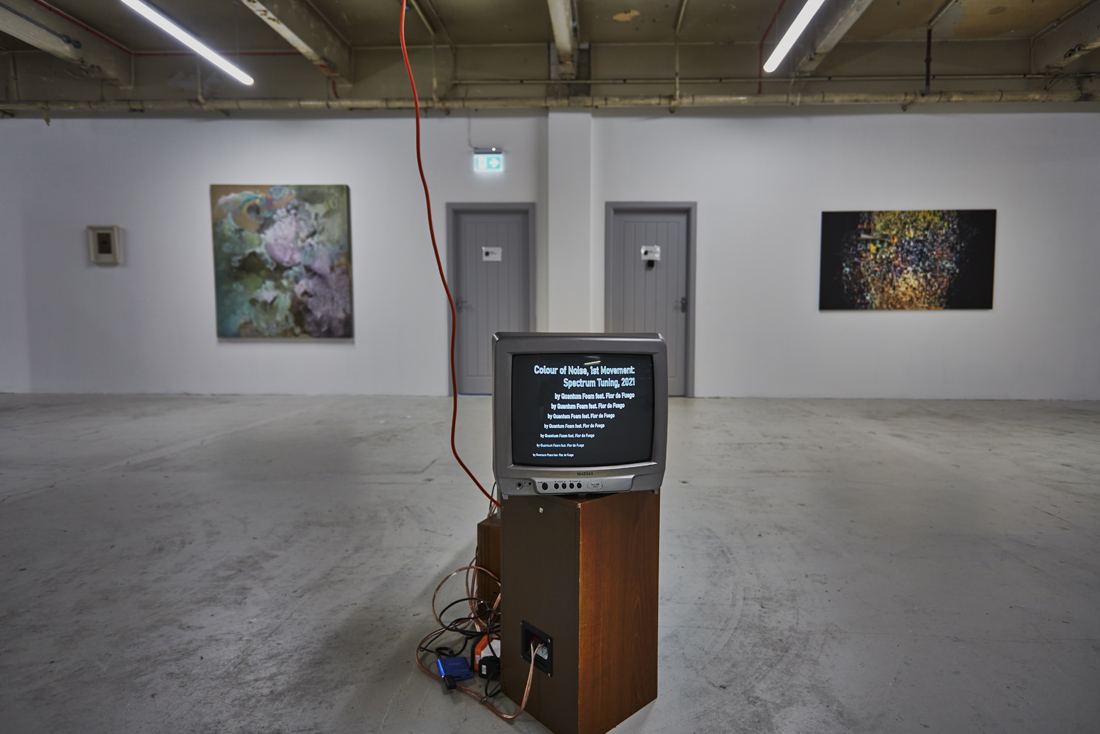 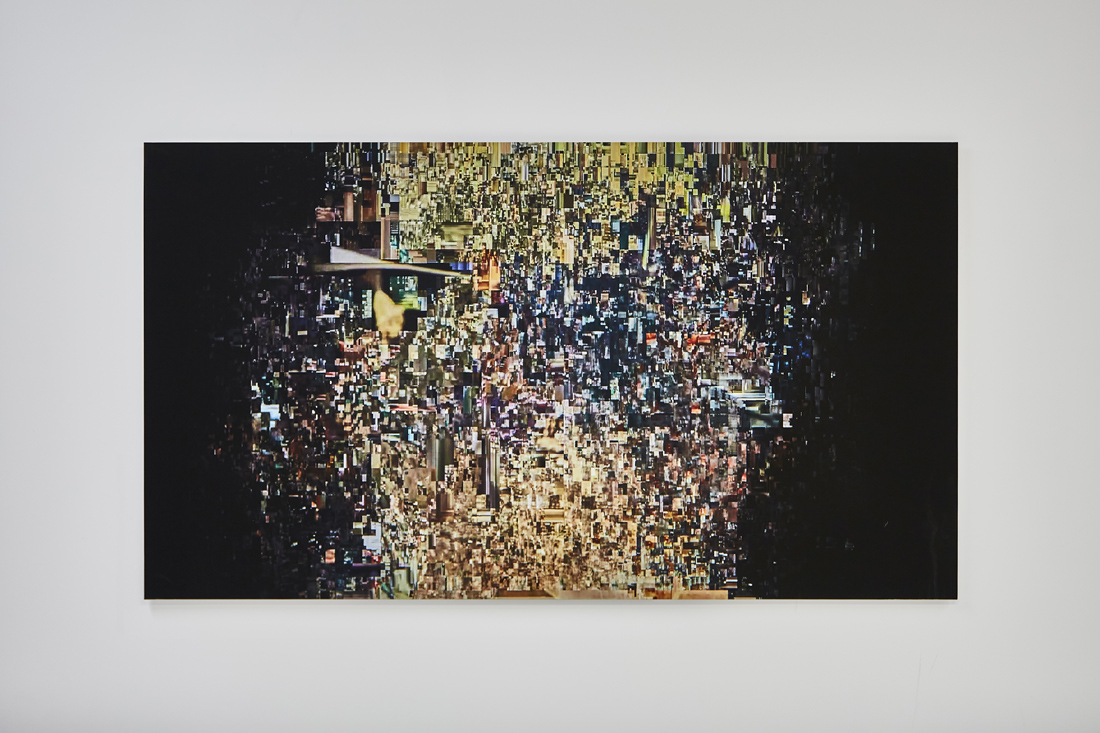 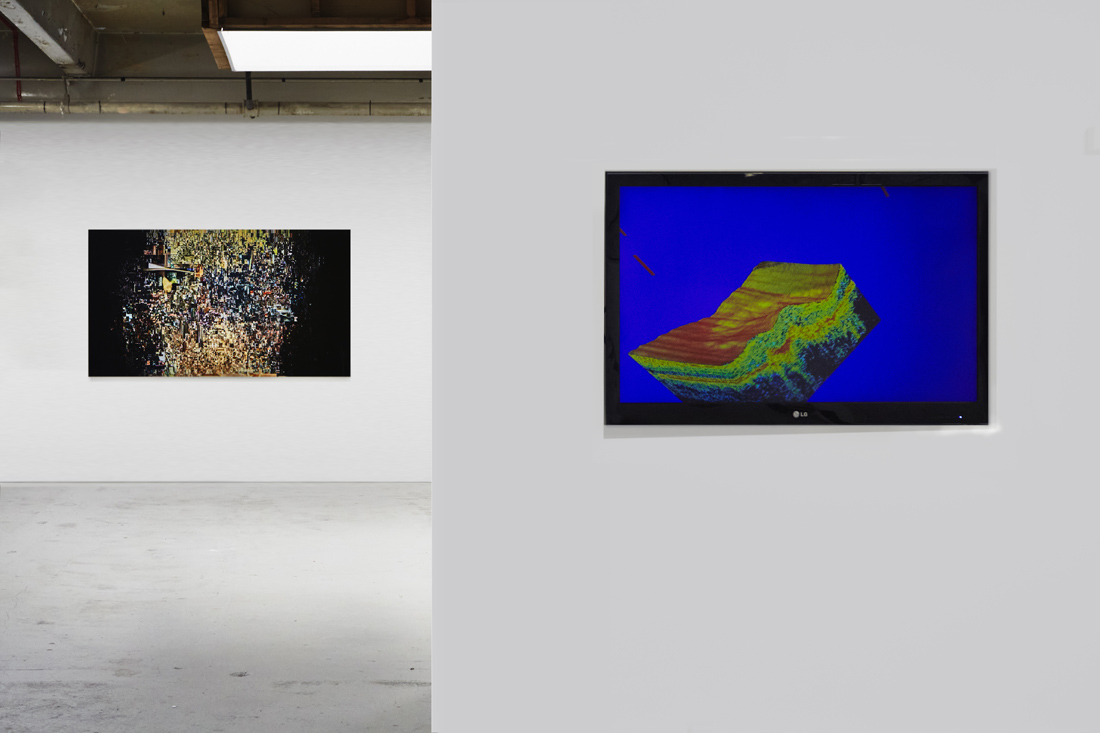 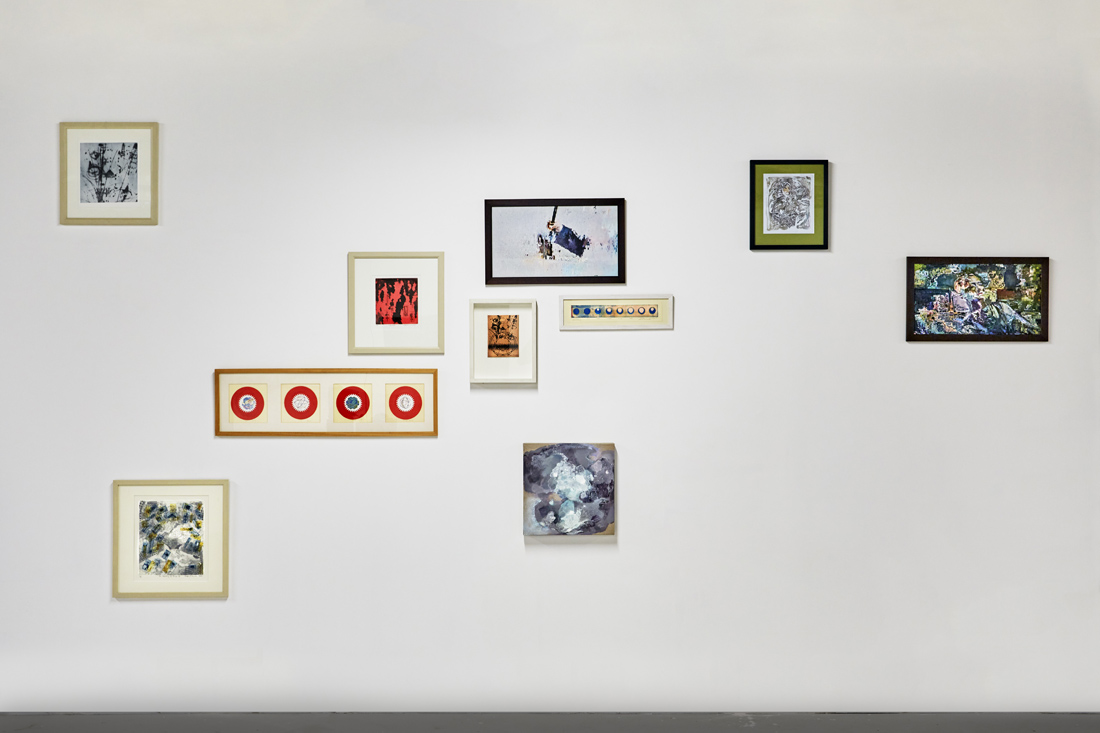 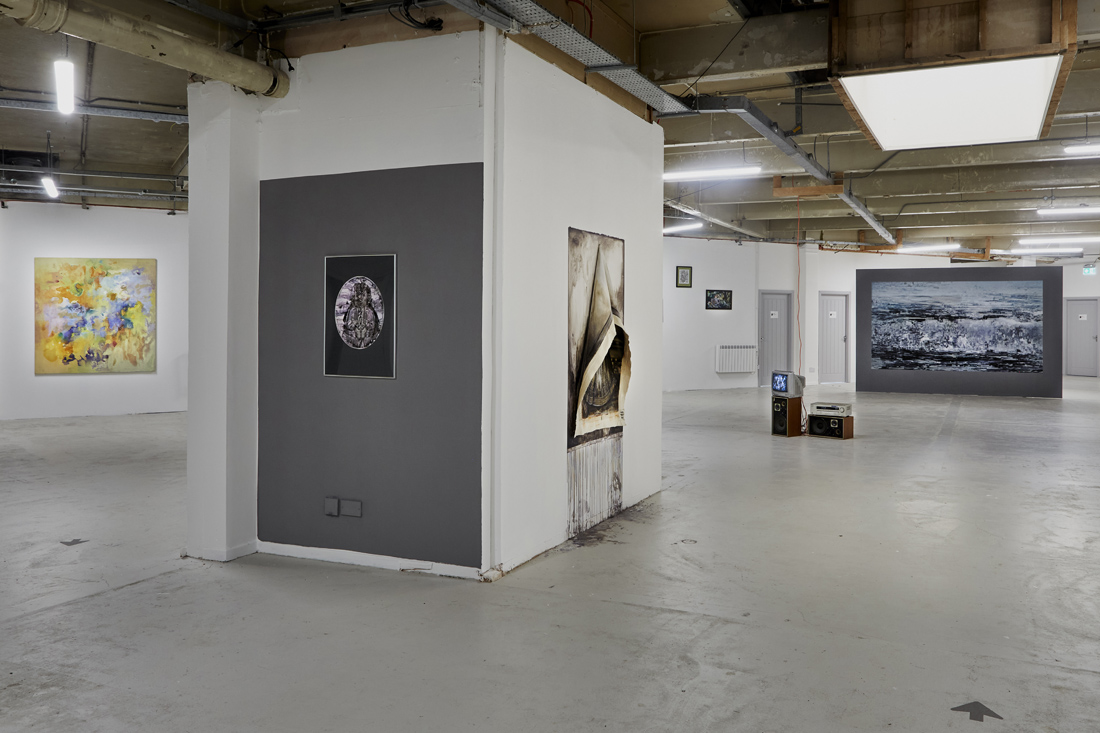 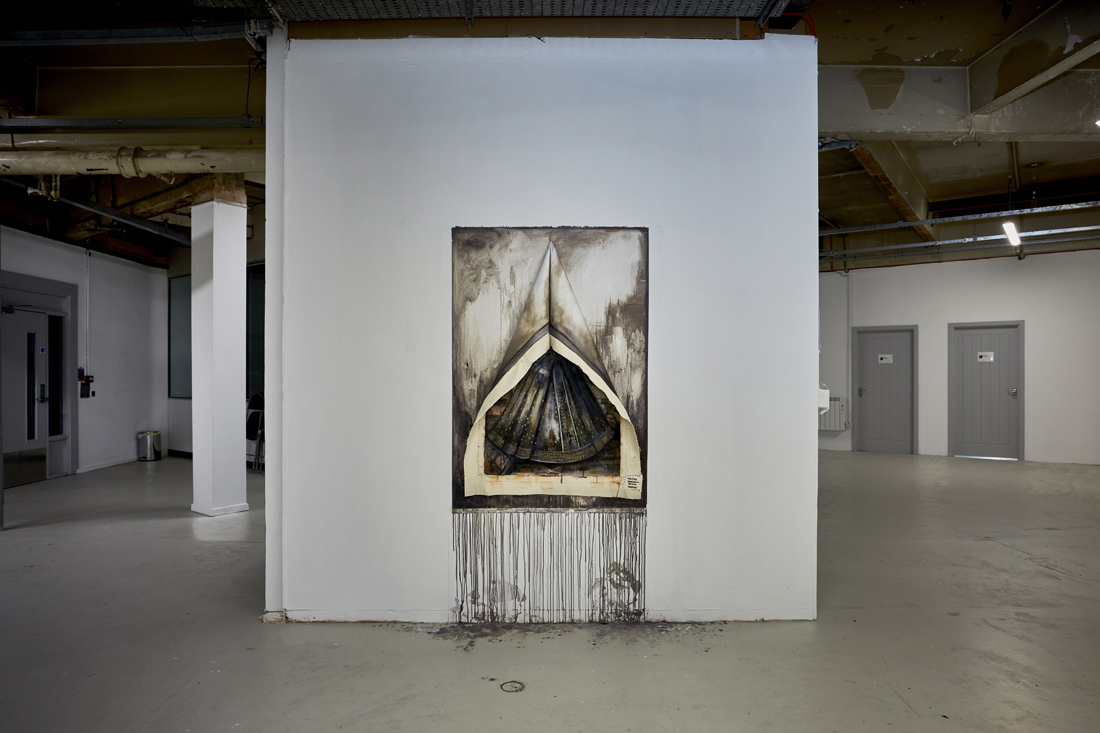