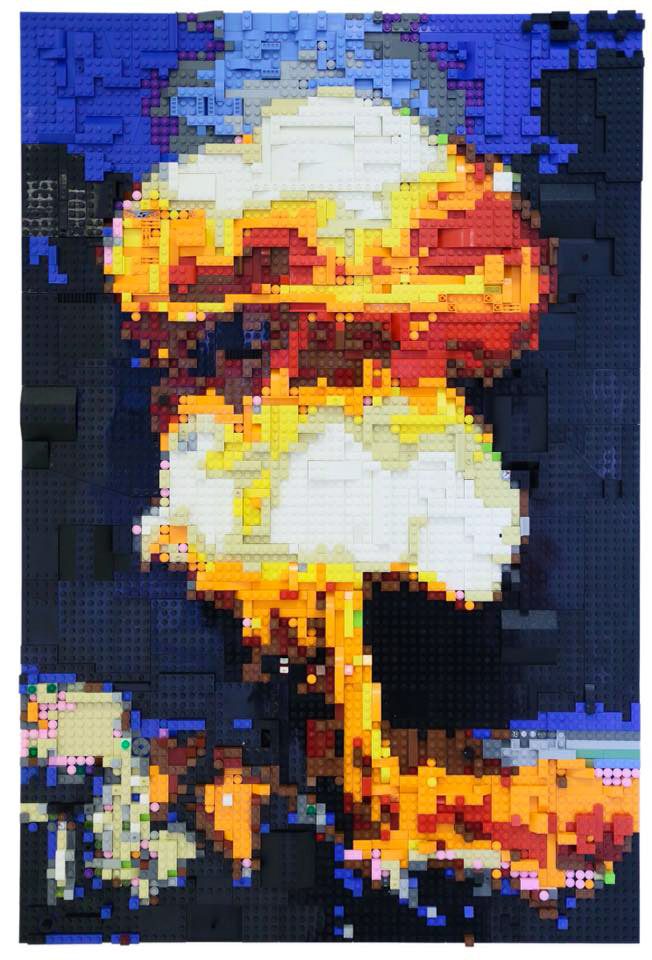 With A Series of Small Explosions, Belfast-based artist David Turner presents powerful images of bomb explosions created using LEGO bricks and Hama Beads and intended as a critical commentary on war and terrorism.

Turner has used these popular children’s building mediums to produce colourful panels and objects representing bomb blasts. Their playful toy-like aspect is only apparent, as these art works offer a denounce of the brutalities experienced by children caught in war zones and terrorist attacks around the world, be they victims or perpetrators as young fighters, of death and violence.

These explosions also provide a critical reflection on how children are being exposed through war toys and games to the glorification of war and fighting, and the denial of their devastating effects on human beings.

Turner created the exhibited pieces conveying a critical commentary on war and violence drawing upon considerations on present and historical conflicts and terrorist attacks, and future threats, as well as recalling memories of the conflict he experienced as a child when growing up in turbulent Belfast during the ‘70s.

The artist has produced a wide and diverse body of work exploring and highlighting the atrocities and glorification of war and violence. Using a variety of forms and mediums, he has made both two-dimensional representations and objects related to these themes, and with seemingly playful toy-look for their use of LEGO bricks, Hama Beads, crayons, or because replicating popular war toys.

With A Series of Small Explosions focusing on the destructive power of bombs, Turner returns to a motif that informed past and new art pieces. The exhibition brings them together in the same space for the first time in Belfast, thus creating a strong thematic and visual unity and a cumulative effect that amplify the catastrophic consequences of violence.

All art works are for sale through Queen Street Studios and Gallery.

Additional works produced as part of the small explosions’ series but not included in this exhibition can be viewed in Turner’s studio after the show.

A Series of Small Explosions is curated by Francesca Biondi ([email protected]).

About the artist David Turner

David Turner lives and works in Belfast, and is a studio member of Queen Street Studios.
The artist attended the School of Arts at the Ulster University where he obtained a BA (Hons) in Fine Art and a Master of Fine Art Degree. He exhibited locally, in the Republic of Ireland and United Kingdom, and also internationally in Europe, USA and China.
His art has been acquired for private and public collections including that of the Arts Council of Northern Ireland.
Turner also contributed to the Belfast’s art scene supporting both artists and arts organisations. A founding board and studio member of Platform Arts Belfast, he played a major role in establishing it as one of Belfast’s go-to venues for contemporary art, and until recently he sat on the Board of Queen Street Studios.

About the curator Francesca Biondi
Francesca Biondi studied arts administration and management at Birkbeck College, University of London and completed Master Degree in Art History at the Open University focussing on modern and contemporary art.
She presently works as a freelance Arts Manager and Consultant, curating exhibitions and providing advice to artists on funding and professional opportunities.
Francesca has been working in the cultural sector in Northern Ireland for over fifteen years. Among others she was a founding board member and Co-director of Belfast Platform for the Arts, a prominent gallery and studio space in Belfast, and she now sits on Queen Street Studios Gallery Sub-committee.