Niamh’s practice centres around drawing, but also includes written prose, watercolours and super 8 video, which she would describe as expanded forms of drawing. Her practice reflects an interest in memory and temporality. Exploring the relationship between photography and drawing, a focus is placed on the embodied presence of gesture and materialisation through re-description of found and personal photographs.

Walter Benjamin describes Proust’s ‘memoire involuntaire’ as a moment from our past that is recalled by chance through the senses and is connected to a previous lived experience in which the past state of internal and bodily experience inhabits the present. The re-drawing of a photographic image allows the memory of the moment to re-emerge, the act of drawing brings the image close again, the intimate moment of drawing reawakens the moment of viewing. Through the consciousness in making, the intimacy, the path of thought and memory that leads from the image, the physical drawing becomes a residue of the activity.

“From the honeycombs of memory, he built a house for the swarm of his thoughts”

Benjamin’s analogy of the worker bee when describing Proust’s actualization of memory is a fitting description for Niamh’s drawing practice and the implications of memory in the work. The attention to detail and rhythmic movement in the act of drawing, the busy work of the purposeful remembering, or actualization of the image lets something unconscious seep through, and the drawing exists as evidence of this lived experience.

The recording of what could be described as Proustian moments informs the selection of imagery used. Niamh uses images intuitively to create an implied narrative, in an attempt to materialise thought, bodily references or emotion. Influenced by Virginia Woolf’s phenomenological and embodied prose and conflation of nature and the human condition, landscape and natural form is dominant.

Niamh is a recent graduate of Fine Art from Ulster University.  She is a co-founder and member of the collaborative drawing group The Drawing Journal. 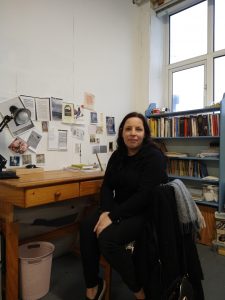