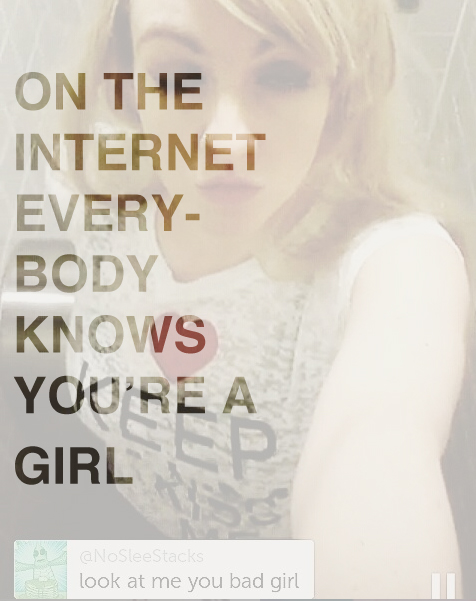 A SOLO EXHIBITION BY LAURA O’CONNOR

In 1993 The New Yorker published a cartoon by Peter Steiner featuring a dog using a computer with the tagline “On the internet nobody knows you’re a dog”. That was a time when the Internet had the promise of anonymity, whoever or whatever you were was irrelevant, on the Internet you could be anybody you wanted to be. That was a time when text was the form of online interaction. Today’s language is the Instagram image; the selfie; the snapchat; the youtube video; the facebook profile; the tumblr page. There seems to be no escaping ourselves, everybody knows who we are.

But what does it mean to ‘know’ what or who you are? Everybody knows you’re a girl. The embodiment of femininity has become a huge commodity on social media with the ever-growing makeover industry, DIY videos, 30-Day squat challenges and the focus on the self. The construction of the self promoted through healthy living; being in love; being fit and strong, ripped and toned; being happy and confident; caring and independent; looking good in the latest fashion or with the newest makeup trends.

Ringrose and Renold (2011), drawing from Rosi Braidotti’s Deleuzian inspired ‘schizoid double pull’, use the term ‘schizoid subjectivities’ to describe the position girls and young women are in, navigating “schizoid tensions of gendered sexual innocence and (hetero)sexual subject/objectification”[1], in other words- the good girl vs the bad girl.

The concept of girl is also one that has evolved into adulthood; girls are not just adolescent females. Identifying as a girl online and IRL is not age specific, it’s worn like a t-shirt, it’s a state of mind- a positive affirmation, in the words of Beyonce: “Who runs the world? Girls”.

It is this schizoid subjectivity that Laura O’Connor’s art practice addresses. Using a variety of strategies from live streaming and live green screen to durational, hyperactive performance O’Connor attempts to embody the schizoid female all at once. Her fictional character SweetHeart is the resulting embodiment of this information overload. SweetHeart is an over consumer of the ‘girl’ concept, challenging herself to achieve everything at once and challenging her audience (live and online) to endure this chaotic scene.

For the exhibition ‘On the Internet everybody knows you’re a girl’, O’Connor will turn one part of the gallery into a virtual set using a green screen stage where she will inhabit the gallery over the 6-week period performing as the social media influenced-schizoid subject ‘SweetHeart’.