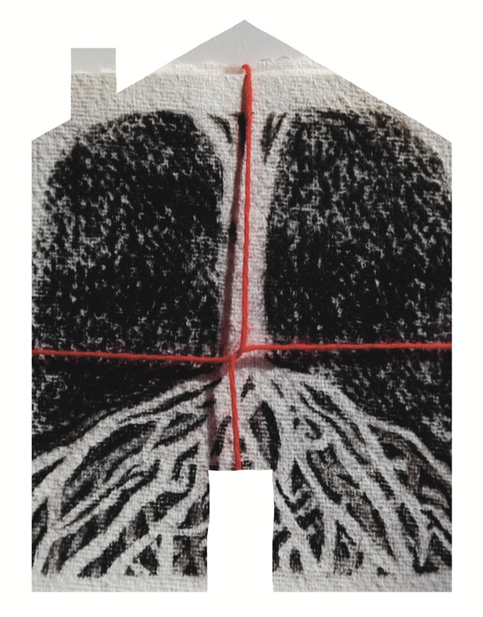 And on a morning as dark as night

It is not easy to see all that is around you

The hills, rivers, and roads, all coated in

A Fog that seeps oh so slowly over you

Tied down by red, It binds you, holds you But not all is still in the darkness

Great ancient trees lift their roots and crawl The feathers of birds curled in their branches Only the Blackbirds awake,

a song for a morning as dark as night

With text inspired by the words of Anne Carson and Mary Oliver, A Morning As Dark As Night is a collection of short stories by Sharon McKeown told through sketchbooks, drawings, and objects found and made over the past year and a half. Imagery unintentionally repeats itself, interweaving its way throughout the show, connecting the stories in a loose fragmentary form. McKeown is currently working towards developing  a broader collection of mixed media works that are all underpinned by a simultaneous narrative.

Sharon McKeown graduated from Ulster University, Belfast in 2018 with a BFA(Hons) in painting. In addition to her degree she studied at Saimaa University of Applied Sciences, Finland (2017) where she staged her first solo show Unknown Ventures. Sharon is a studio holder at Queen Street Studios and a proud member of The Drawing Journal. Recent group shows include Image Of Thought at An Cultúrlann (2020) and Thing at Ards Arts Centre (2021)